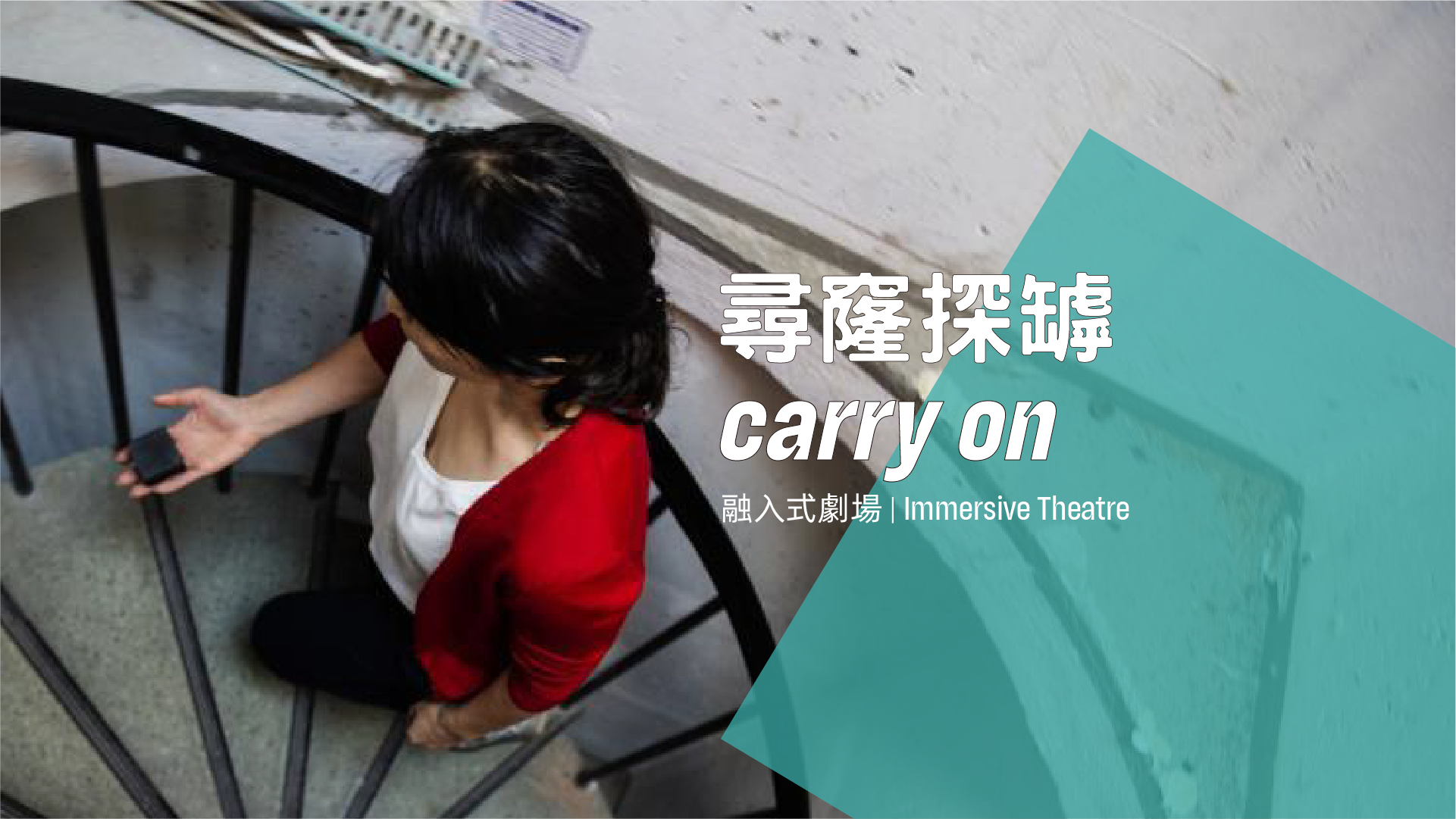 Programme 1. Dialogue：carry on
Duration：approx 20 min
with Chinese and English subtitles

The core creators of Belgium-based arts group fieldworks, Heine Avdal (Norway) and Yukiko Shinozaki (Japan), have visited Hong Kong twice since May 2019 to collaborate with Hong Kong artists on staging a series of subtle, playful and imaginative interventions at Tai Kwun. Daily life is animated from private hidden corners to bustling streets outside, setting free the history and the memory held captive in the space, the movement, and the body.

The outcome of these sessions, carry on, was originally conceived as a series of 16 unconventional guided tours scheduled during February 2020 as part of the 48th HKAF. In light of the global pandemic and the postponement of the programme, fieldworks will instead take viewers behind-the-scenes of their working process.

On 27 August 2020, a special online reunion was arranged to bring together Avdal, Shinozaki and participating local artists to discuss how the work has evolved in Hong Kong and how the artists’ vision has ignited the performers’ imaginations.

Shot during the preparations and happenings of fieldworks portrait, a three-day performative exhibition held at PACT Zollverein in 2018, this film documents the artists’ reflections during the creative process. Only available for a limited time at HKAF at Taikwun Facebook.

Heine Avdal (Norway) is active in the fields of contemporary dance, performance, video and visual arts. After studying at the Oslo National College of the Arts and P.A.R.T.S. (Brussels) and working as a performer for various companies—of which the most prominent was Meg Stuart’s Damaged Goods—he started making his own work, most often in collaboration with Yukiko Shinozaki. Avdal’s recent projects have focused on the distribution of space and the way spatial conventions affect personal experience. In this context, Avdal also questions how technology is being used or can be used in acquiring new meanings and perceptions of the human body and our daily surroundings, investigating the blurred distinction between what is artificial and what is organic.

Yukiko Shinozaki (Japan) studied classical ballet in Tokyo and then contemporary dance and psychology at Portland State University. After graduating, she worked in New York as a freelance dancer as well as presenting her solo works at various venues. Since 1997, she has been living in Brussels and collaborating with Heine Avdal. Shinozaki’s work focuses on internal complexities and contradictions of the body. The process of transformation takes an important role in her movement vocabulary: through subtle shifts and manipulations, familiar actions slowly transform into an unfamiliar realm. She considers artistic collaboration an important factor in her work and consciously integrates serendipitous elements from encounters with different artists and situations.

fieldworks is the Belgium-based company of Heine Avdal and Yukiko Shinozaki. Since 2000, they have created more than 20 productions, all of which have been toured internationally. Their various productions are concerned with “performativity” and allow for an open interpretation of movement as a heterogeneous combination of a variety of media. Consequently, the artists draw on a broad range of disciplines and expertise: performance, dance, visual arts, video, music and technology. Every performance plays on the tension and contrast between the body and objects, the body and the mind, fact and fiction, the tangible and the invisible, the organic and the artificial . . . Recurrent themes in the productions include the relationship between performer and spectator, the non-hierarchical approach to the various elements of a performance, and the exploration of both theatrical and non-theatrical environments. www.field-works.be

Anson Chan (Hong Kong) graduated from the Hong Kong Academy for Performing Arts, majoring in drama. Since graduation, he has performed in Red Chamber in the Concrete Forest (42nd HKAF); Antigone: North East Village Edition (Theatre Horizon); Quai Ouest, Golden Dragon, Postcolonial Affairs of Food and the Heart, Fragments of Stones and Gold, Electronic City, The Ugly One (On & On Theatre Workshop); Life of Galileo and Hamletmachine (Alice Theatre Laboratory); and The Sorrows of Young Yat Sum (Ricochet Ensemble, International Arts Carnival). He has written two plays, Without Him, My Family and Pigdog, which were presented in the Playwright Scheme organised by Prospects Theatre.

Mandy Chen (Hong Kong) graduated from the School of Drama at the Hong Kong Academy for Performing Arts (HKAPA), École Philippe Gaulier, Griffith University (MA in Applied Theatre and Drama Education) and European Graduate School. She is a veteran performer and educator for theatre-in-education. In 2000, she was granted an arts scholarship by the Hong Kong Arts Development Council for her further studies in the UK and later with Moshé Feldenkrais in Paris. In 2007, she gained another arts scholarship to study in the UK under Tim Wheeler from Mind the Gap Theatre Company. After her return, she adapted the moth ball, co-directed with Tim Wheeler. She currently works as drama practitioner for the School and Community training programme, as a practitioner of the Feldenkrais Method™ and as a performer.

Han Mei (Hong Kong) was born into a dancing family in Shanbei, China. She was awarded scholarships from City Contemporary Dance Company and City Contemporary Dance Centre to study at the Hong Kong Academy for Performing Arts, graduating with a Modern Dance Professional Diploma. She was also awarded the Hong Kong Dance Alliance’s Hong Kong Dance Award for "Outstanding Performance by a Female Dancer” with Homecoming, choreographed by Pewan Chow from Passoverdance in 2010. In 2018, she won first runner-up in the 18 District Singing Contest. In 2019, she joined the John Chen Ensemble as a vocalist. From 2006 to 2019, she participated in productions by On & On Theatre Workshop, including Cosmo X, Postcolonial God of Food, Kassandra: oder die Welt als Ende der Vorstellung, Fragments of Stones and Gold and Ballads of Expulsion, among others.

Wing Moa (Hong Kong) graduated with a Bachelor of Arts (Hons) in Comparative Literature from the University of Hong, minoring in both Media and Cultural Studies and German. She also has a Bachelor of Fine Arts (Hons) in Acting from the Hong Kong Academy for Performing Arts. She was nominated Best Actress at the Eighth Hong Kong Theatre Libre for her performance in The Electronic City (Director’s Cut). Her recent productions include Best Wishes, The Plot, Quai Ouest, Postcolonial God of Food, Postcolonial Affairs of Food and the Heart, “Century-old Dreams” of A Fishing Harbour Episode III, The Awakening and Landscape in the Mist (Argentina tour). Recent school productions include Miss Julie, The Electronic City and Night, Mother. She has toured in France, Argentina, Taiwan and China. She is also a professional emcee and has worked in radio and TV broadcasting company as reporter and host.